View Philadelphia is left - pins for Crosswicks Creek in New Jersey in a larger map
Click + or - to Zoom In or Out, Click on the colored pin to see the details of the location
Click and drag the hand to move the map, or click the link above to see all my ancestor locations.

Thomas FALLIS' first document is found in Colonial East New Jersey on a December 11, 1731 land deed an inhabitant of Mansfield Township, Burlington County purchasing land in Monmouth County on Crosswicks Creek in East New Jersey about 25 miles northeast of Philadelphia. Mansfield Township is only 10 miles from Philadelphia. Burlington County was the center of Quaker religion of West New Jersey which implies my FALLIS ancestors may have been Quaker. The deed specifically mentions a Quaker witness, it does not mention Thomas was Quaker. Was it because Thomas was a Quaker, or Not? Can read it both ways - as a Quaker with a Quaker witness or a non-Quaker in a mostly Quaker area with a Quaker witness. Who knows?

A Partial Record of the Fallis Family in America by William Stuart FALLIS of Rockingham County, Virginia was my original source of FALLIS family information and Fallis Family Genealogy 1658-1960 by Watt L. FALLIS, still a Quaker, of Washington state both have Fallis family trees on LDS microfilm. I have three slightly different variations of William Stuart FALLIS' family tree. Early in my research I found a lot of secondary information on George, Thomas jr. and Isaac FALLIS' family lines. Once I found my correct FALLIS family line I have documented and worked extensively on my line.

Thomas FALLIS appears on an August 9, 1748 Monmouth County, New Jersey marriage bond for Margarey FALLIS most likely his daughter marrying Joseph HORNER August 29, 1748. She is recorded as Margery Hallis in the New Jersey Marriage Records, 1665-1800 book by William Nelson. The HORNOR's are among Burlington County's most prominent Colonial Quaker families further implying that the FALLIS' were also Quaker. The New Jersey researcher who found Thomas FALLIS' deed and marriage bond, stated Colonial Quakers married only among their sect. Several Quaker books state that people attended Quaker churches without being active members or appearing in the Quaker documents that survive. A 2007 comment by a Stafford County, Virginia researcher supports the idea that Follis' migrated from New Jersey to Virginia.

View Virginia on left to Philadelphia on right in a larger map
Click + or - to Zoom In or Out, Click on the colored pin to see the details of the location
Click and drag the hand to move the map, or click the link above to see all my ancestor locations. 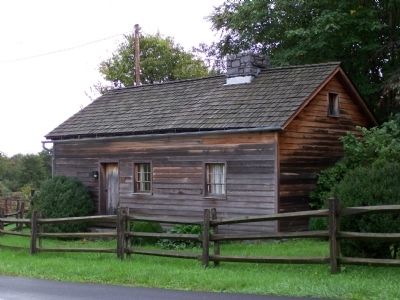 Thomas Follis appears in Frederick County, Virginia land records surveyed in 1749 with 255 acres, then 301 acres and 242 acres surveyed in 1751 - a total of 798 acres of land implying some level of wealth. The deeds were recorded in 1754, 1754 and 1753 respectively. His oldest son George purchased more land than usual when moving to Stafford County based on the 2007 comment above, so have to assume as a result of his inheritance of his father Thomas' 301 acres of land. The 301 acres was adjacent to Colonel Morgan Morgan first white settler in 1731 West Virginia, now considered an early arrival, and established first church in West Virginia. Of interest is his Colonel Morgan Descendants say he was born in Wales, came to America in 1712 before arriving in Virginia in 1731 and has a Facebook group. The dates match what some Fallis researchers claim is our Thomas Fallis origin and arrival time. Morgan is buried at Christ Church Morgan Chapel he organized in 1740, shown on Find-A-Grave so perhaps our Thomas Follis is too, or buried on his nearby Follis farm?

Starting in 1730 there was a large migration of Quakers and Scots-Irish from New Jersey to Virginia through Philadelphia by way of the Great Valley Road to the Winchester, Frederick County, Virginia area. If Thomas FALLIS was a Quaker all records were lost when the nearest Quaker church near Winchester, the Hopewell Quaker Church organized in 1734 burned in 1757 destroying all records prior to that date. The replacement 1759 Hopewell Meeting House is still standing and is the oldest church in the Frederick County, Virginia area. Thomas' land is about 7 miles from the Hopewell church and less than 12 miles from Winchester. The Daniel James FALLIS 1795 Kentucky biography claims his father George, son of Thomas, was a childhood friend of George WASHINGTON. While the childhood part is probably not correct, George WASHINGTON started his survey career in 1748 at Winchester the same time Thomas FALLIS started buying his Virginia land in 1749. In 2009 Hopewell celebrated its 275th Anniversary and is still active as Hopewell Centre as part of Baltimore Yearly Meeting. There is a cemetery next to the Hopewell Meeting House, most Quaker's rarely used tombstones so most burials are not marked in any way. Thomas Fallis wrote his will September 13, 1755 and it was probated February 3, 1756 indicating he died sometime in between. Thomas' will leaves his wife Elizabeth one third of his 798 acre plantation then in Frederick County, Virginia now Berkeley County, West Virginia. It was about 14 miles west of Harper's Ferry of historical fame. Harper's Ferry was first settled in 1732, the ferry started in 1761, is a historic town, and is part of the National Park Service. The 242 acre plot was to be divided among the three youngest sons Abraham, Isaac and Jacob upon Elizabeth's death. His oldest son George got the 301 acre plot and Thomas got the 255 acre plot. There is no mention of Margaret or any other daughters in the will.

Some FALLIS researchers list Thomas as Thomas Richard FALLIS, thought to be an error, but a Richard Fallis March 2, 1756 with William Duckworth, at bottom of page, whose land Thomas adjoined in 1753, was "sworn do mark a road" in Frederick County, Virginia, a month after Thomas' will was recorded - however there is no known Richard Fallis living at this time? Thomas' wife is often listed as Jane CHELDON. A grandson Thomas Chilton FALLIS implies perhaps Thomas had a first wife Jane CHELDON or CHILTON. Thomas' wife in his 1755 will was Elizabeth and along with son George witnessed the inventory sold after Thomas' death. Other than oldest son George, the names come from the Bible perhaps implying a different mother Elizabeth. Years ago before I saw the spelling as CHILTON, I was unable to find the surname CHELDON anywhere. There were lots of SHELDON'S, SHELTON'S and SKELTON'S. The secretary of the SHELDON Family Association which has documented 67,000 individuals, perhaps 25% of the total Sheldon's, and holds annual national meetings, told me a few years ago that there were no CHELDON'S in their extensive files!

I include these internet links because there is some truth to most of them perhaps providing locations or dates not found elsewhere. I continue to find errors in my documented FOLLIS lines so accept online material only as guides of places to look.

This Duckworth Information may help locate the Follis land since like Morgan Morgan discussed at the top he was a neighbor recorded in land deeds, Ridgeway's are connected with son George Fallis, his wife is claimed to be Mary Ridgeway, but no proof has been found:

February 25, 1767 "Uriah Duckworth of the County of Bucks in the Province of Pennsylvania, Eldest Son and Heir at Law of William Duckworth late of the County of Frederick and Colony of Virginia deceased". for L150, conveyed to "John Neavill" of the Parish and County of Frederick.....a certain tract or parcel of land.......in the County of Frederick and Colony of Virginia aforesaid and is thereby the same tract whereon his father the said William Duckworth formerly did live joining the lands of the said John Neavill, George Fallis, John Ridgeway and Isaac and Jacob (F)Rallis and contains 235 Acres and Granted (on July a6, 1755) to the said William Duckworth deceased by....the Right Honorable Thomas Lord Fairfax proprietor of the Northern Neck of Virginia.....beginning at a White Oak corner of Even Thomas's ......and the said Uriah Duckworth....is signed of a good and indefeasible Estate of Inheritance in fee simple......." Both instruments were witnessed by William Jolliffe, Mord Walker, John Smith, Bryon McGraw and John Armstrong and Ordered Recorded March 4, 1767. [Ibid., Deed Book 11, page 321, Order Book 13, page 323]. Mary (Wright) Duckworth, of New Jersey was by this time dead, thus terminating her "Downer Rights" and leaving "Clear Title" to the Land in the name of the Eldest Son and Heir at Law, "Uriah Duckworth". If Uriah Duckworth ever lived in Virginia it was only a short time to lay claim in Court to this Estate, which the Attorney Joseph Wright (Relative to Mary??) identified himself as attorney for Mary (Wright) Duckworth and the Eldest Son Uriah (Who was inhabitant of the County and Colony of Virginia, was represented).