He is probably the best-documented Ottawa Indian of his time, due to his relationship as son-in-law to Rev. George N. Smith, Sr., missionary to the Waukazoo band of Ottawas.  He was the only surviving child of Charlotte Waukazoo and Miegun.   Charlotte lived to a great age, but Miengun died at the Old Wing Mission when Payson was about 8.   Payson was a grandson of the original Chief Waukazoo.    See his mother's biography elsewhere on this website for the story of how he came to marry Mary Jane Smith, a daughter of the missionary.

When Payson married his daughter, Rev. Smith's diary noted: [1851] 31 [July] - 3 Oclock P.M. I Solemnized the marriage of Payson Wolf aged nearly 19 years & our oldest daughter Mary Jane Smith aged nearly 16 years all the people of our Settlement were present (except Chief & family]  We gave them an entertainment. The occasion was pleasant- - - - Payson Wolfe enlisted 3 Aug 1863 at Northport for 3 years.  He was 30 then and already the father of several small children.  He mustered 8 Aug 1863.  He was a member of the all-Indian Company K of the  1st Michigan Sharpshooters.  He was taken prisoner 17 Jun 1864 at Petersburg, spent 3 weeks in Libby Prison and survived 5 months at the Andersonville POW camp.  He was paroled from Andersonville in December 1864 and returned to Northport for several weeks, then returned to his regiment.  He was discharged at Camp Chase, OH 13 Jun 1865. How Payson came to be paroled from the Andersonville POW camp

From a history of Andersonville/Camp Sumter

...as early as January, 1864, the Confederate Commissioner for Exchange [of POWs], Colonel Robert Ould proposed to his Union counterpart that doctors and medical supplies of opposing forces be admitted to POW Camps to care for their own sick countrymen.   This offer, if accepted would have done much to ease the suffering of Union POW's, but the offer was never even acknowledged by the North. Page writes of this: "...I have, during the past fifteen or twenty years, read accounts from Southern sources, that the Confederate Government during the summer of 1864 asked the Washington authorities to send physicians and hospital supplies for the express use of Union prisoners held in the South; they pledged that those supplies would be only for the Union prisoners; and it was said that Washington authorities ignored the proposition. This seemed incredible, and I hoped that this charge would be satisfactorily contradicted by Northern writers acquainted with the facts, but I have never read or heard a word of refutation of it." 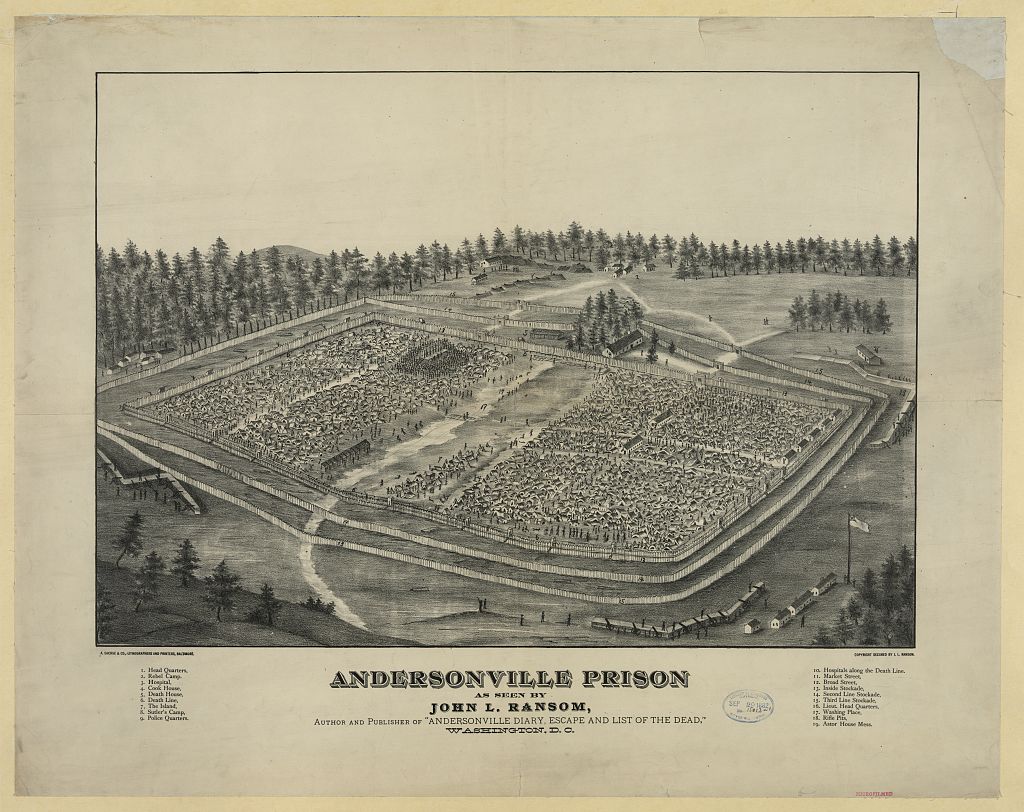 Finally Ould offered to deliver up all sick and wounded Union prisoners without requiring an equivalent number in return. Though this offer was made in August [1864], the U.S. Government did not send ships for them until December, almost five months later.  As noted earlier, this was the very period when most of the Union deaths were occurring, where Federal haste in the matter would have saved thousands of lives. Ken Burns, in his book, "The Civil War," page 335, writes: "One of the cruelest charges made against Abraham Lincoln was that he was guilty of 'shameful disregard' of the thousands of Union prisoners languishing in Southern prisons."

Home on leave in Northport, December 1864

From the diary of his father-in-law, Rev. George N. Smith, Sr.:

December 20 1864 : Payson arrived about 2 PM, a paroled prisoner. was paroled at Savannah & 1100 prisoners took the Steam Ship Constitution & were landed at Annapolis. they were furnished a suit of clothes on going on board the ship & another suit when they landed at Annapolis. he says they suffered terribly while prisoners -- going sometimes 2 & 3 days & a number of times 4 days with out eating at all --  -- men robbed of their blankets & overcoats & lived & slept in the open weather, their bed the ground, their covering the rain -- water sometimes 4 inches deep where they had to lie. All the family took supper and with us eve.

December 30 1864 : Payson, Mary and the children spent the eve here, had supper with us. He tells shocking stories of their suffering while prisoners -- he says when men got so weak they could not keep their rations on their stomachs -- would vomit up beans as soon as swallowed & others would rush to eat the vomit with greediness & often the boiled rice would be alive with full grown maggots -- he has eat it so -- was obliged to or starve.

Back to the 1st Michigan Sharpshooters, February 1865

From the Grand Traverse Herald 10 February 1865:  NORTHPORT VOLUNTEERS- Lewis Miller left here on Wednesday morning for Grand Rapids, with three Indian recruits from Northport.  Payson Wold, a paroled prisoner, who has just been exchanged, accompanied them to join his regiment.

I, James S. DeLand do hereby certify, that I was Captain of Company "K" of the First Regiment of Michigan Sharpshooters and am acquainted with Payson Wolf who was a member of my Company and as I am informed is a candidate for an Invalid Pension.  That the said Payson Wolf was mustered into service on or about the Tenth day of August 1863, and was discharged as a paroled prisoner about the 13th day of June 1865.  That he became disabled from doing duty as a soldier, while in the service of the United States, and in the line of his duty as a soldier, at the time and place, and in the manner following: to wit He was taken prisoner at Petersburg Virginia on the night of the 17th of June AD 1864.  he was taken to Andersonville and confined in the prison there till about the 25th of the following November. that during the time of his imprisonment he was attacked with diarrhea at first and then with scurvy, his gums swelled, a part of his teeth fell out, his legs & arms swelled to a monstrous size, his muscles contracted badly so that it was difficult to move at all, and he is still afflicted with scurvy, has lost about half the fore finger on his left hand, suffers much and is disabled so that he cannot labor.
That the said soldier was in good health at the time he entered the service, and the disability above referred to affected him while in the service, and at his discharge, as follows: his feet and legs swelled and he suffered much pain every night.
James S. DeLand
late Capt. Co. K. 1st M.S.S.
Given at Jackson this Eighth day of August 1866. I hereby certify that I am well acquainted with Pason Wolf, have well known him during the last four years as a resident of North Port in this County; knew him when he went away with Captain DeLand's Co. K first Regiment Michigan Sharp Shooters to fight the southern Rebels, and knew him when he returned home a half killed victim of "our deer Suthrn brethren's" worse than Savage Cruelty.  I agree to all that Doctor B. D. Ashton, whose accompanying certificate lies before me, states with regard to Mr. Pason Wolf's suffering and disabilities.  Have urged him more than a year since to apply for a Pension, knowing that he is not able to maintain his family by such labors he can do and get here.  But he had a little money left that he had earned by killing Rebels, and having been a strong man, he still hoped to get well enough to earn a living with a Pension.   That hope is now anihilated, and he has, for the sake of his family, consented to receive a Pension.
In addition to what Dr. Aston has stated, I would say that last spring it appeared as though Mr. Wolf's finger would come off at the joint that connects it with the hand, but since then some unhealthy flesh has grown on to near next joint below where the bone protrudes.  It is plain no healthy cicatrix would form; if the finger were amputated below the metacarpal joint, and doubtful if amputated at that joint, so that he would be in danger of losing his hand and quite possibly his life if an attempt were made to relieve him of that part of his finger which now is a hindrance to the use of his hand, in his present state of health.
It is my decided opinion that Mr. Pason Wolf is entitled to a full pension, as much so as if he had lost an arm or a leg.
In witness whereof I have hereunto subscribed my name and annexed my oath at Northport, Leelanau County Mich. This twenty first day of December 1866.
State of Michigan}ss           H. R. Schatterly M.D.
Leelanau County }

I, Geo. N. Smith, a Dept. County Clerk in and for said County do hereby certify that the said H. R. Schatterly M.D. is a regular Physician and that he personally appeared before me and subscribed his name and made oath to the above statement, and that he is not interested in said claim.

from the 1883 Census of Michigan Pensioners. Back to Civilian Life

Competition from white settlers made it increasingly difficult for Native people on the Leelanau [Leelanau County, MI] to rely as they had done for their subsistence on the traditional seasonal round of hunting, fishing, maple sugar-making, horticulture, and gathering. As the son-in-law of George N. Smith, Payson may have felt with particular acuteness the need to adjust his economic practices. To support his family, Payson expanded the seasonal round to include part-time agricultural wage work for his father-in-law, behavior that also reflects his obligations as an Odawa man to his wife's parents.   He also shot and barreled passenger pigeons for the Chicago restaurant market and traded horses between Chicago and northern Michigan. These activities seem not to have sufficiently provided for the rapidly growing family, for by the late 1850s the four eldest Wolfe children were living with their white grandparents. Ultimately at least six of the children did so at various times.

Perhaps the greatest single stress on the Wolfe marriage was the physical and psychological cost of the Civil War. Payson Wolfe served with Company K of the First Michigan Sharpshooters, an all-Indian company in the Union Army.... Captured at Petersburg in 1864 and incarcerated at Andersonville, Payson returned home permanently crippled in his left arm. The Wolfe marriage deteriorated.

In 1878, Payson left Northport to live at L'Arbre Croche [Cross Village, Emmet County, MI] near his mother, who had returned there sometime after 1865. He and Mary Jane divorced the following year.