Some are named for relatives

Follistown, Navan, County Meath is a town and civil parish which had 137 citizens in 1837 and 3,500 citizens in 1881 near Dublin, Ireland in northern County Meath in the Barony of Skreen indicating either a large number of FOLLIS families living there or a prominent FOLLIS family for which the town/parish was named. Interesting is Staffordstown another parish in the Barony of Skreen, about a half mile from Follistown, whose returns were included with Follistown since George Follis, son of Thomas, moved to Stafford County, Virginia - perhaps a desire to symbolically return to Follis ancestral land? In 1839 Follistown was known by the Catholic Parish name Jonestown.  An 1851 census first showed Folistown Poor Law Union Dunshaughlin also in County Meath in the Dunboyne Parish and Follisllagh on an 1885 atlas of County Galway. Follistown now appears in Google searches with homes for sale and area businesses. Wiki.FamilySearch.org has a Follistown page. Parlimentary Gazeteer of Ireland has information on Skreen.


View Fallis land and likely mills in Virginia - West Virginia in a larger map
Click + or - to Zoom In or Out, Click on the colored pin to see the details of the location
Click and drag the hand to move the map, or click the link above to see all my ancestor locations.

Jacob Follis had a mill near Jeremy's Run in Shenandoah (now Page) County, Virginia mentioned in the 1807 deed listing his children.

Follis is the name of leather bags designed in New York since 2009 by fellow midwesterner Catherine Meyer.

Follis is defined as Latin from the Roman Empire as a fixed weight of bronze or copper coins.

Follis Cemetery near Johnson City and West Frankfort, Franklin County, Illinois. Unknown at this time if related as appears to be descendants of William Shelby Follis of England and Halifax County, Virginia

FOLLIS Chapel Gibson County, Tennessee. Located on U.S. Highway 54 southwest of Trenton south of McMurray Road and north of Edison Frog Jump Road. North of Frog Jump,Tennessee. (what a fantastic mailing address!) A William B. FOLLIS is buried here but unknown if he is related.

In Toronto, Canada there is a street named FOLLIS click to see photo by Jason FOLLIS of Canada. He has a weird story about the difference between FOLLIS with an "O" and FALLIS with an "A".

Finnstown House and Castle in Ireland had a widowed owner who married a Rev. FOLLIS who died in February 1925 according to story 10 on their web page. 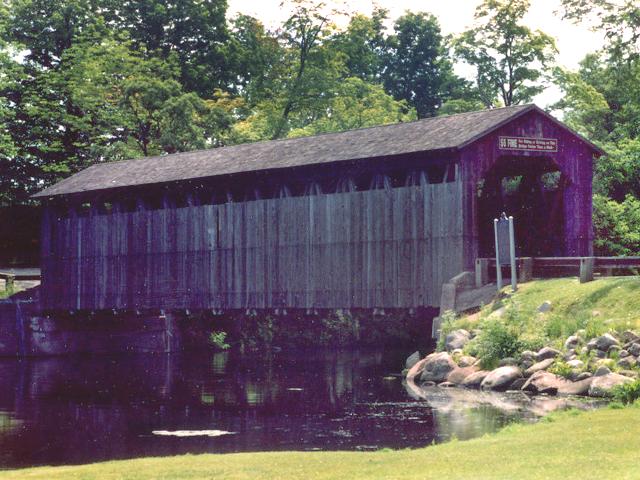 FALLASBURG Covered Bridge in Fallasburg, Kent County, Michigan in Fallasburg County Park. Settled by brothers John W. and Silas S. FALLAS in 1839 from New York, so unknown if related. They have the FALLAS Cemetery with WH born in Boston, Massachusetts. There were FALLIS and FOLLIS relatives in Michigan at this time, just not these brothers. Thanks to distant cousin Jay FOLLIS of Michigan for the original link. FALLIS Cemetery in Mount Sterling, Switzerland County, Indiana. The web site only shows 2-4 of what appears to many tombstones. Samuel FALLIS and Rebecca ADAMS are buried there, along with son George Washington FALLIS and wife and their son George M. FALLIS and wife. Samuel was a first cousin to my fourth great-grandfather Isaac FALLIS of Greene County, Ohio. Samuel son of Samuel tombstone is buried in concrete hiding the death and birth information - it's why I don't like cemetery restorations done with the best intentions but lacking proper materials and methods.

FALLIS, Henry County, Kentucky, FALLIS Creek and the former FALLIS post office in FALLIS, Henry County, Kentucky near Brown's Bottom, Gratz and Montery. eBay did have an envelope with an 1898 Fallis KY postmark. Apparently named for descendants of George FALLIS, son of Isaac and Susanna MARTIN FALLIS, a first cousin of my Jacob FALLIS. A post office seal book indicates there should be letters in collections that would contain the Fallis Kentucky seal and it would be nice to have a copy for this web site and my files if anyone has seen or found one. I assume this FALLIS family is buried in the Fallis - Bryant - Knox Cemetery near Pleasureville.

Fallis in Jefferson County, Kentucky, no information. My gr-gr-gr-gr-grandfather Isaac FALLIS of Greene County, Ohio was in the 1810 Federal Census when this was a much larger county.

FALLIS Cemetery near Salvisa, Mercer County, Kentucky contains some of the children of Robert Kirkham FALLIS and Mary ANDERSON buried in the middle 1800's.

FALLIS PIONEER CEMETERY Located on the southwest corner of the 160 acre pioneer farm of my great-great-great-great-grandfather Isaac FALLIS about 3 miles northwest of Bellbrook, Green County, Ohio. In 1968 eleven inscriptions were recorded, it was fenced and overgrown with most markers down. It is just over a mile east of exit 7 on I - 675 on the southeast side of Dayton, Ohio and will soon be a part of Dayton as it continues to swallow the countryside. There are 7 tombstones listing 11 people and another 20 or so foot stones and field stones marking an unknown number of burial locations.

Fallis School Livingston County, Illinois near Dwight a historical school indicating it is no longer there.

Go to my page for photographs of Fallis, Lincoln County, Oklahoma, Fallis Road and FALLIS Post Office. Oklahoma Territory was opened for homesteading in 1889, with statehood in 1907. Originally named Mission, it was renamed in 1894 for its first postmaster William H. Fallis. William Henry FALLIS may also have been a county Judge. In 1870 he was a hotel keeper in Lawrence County, Missouri. In 1880 a grocer in Joplin, Missouri. There is also a FALLIS Cemetery from 1893 with no FALLIS' that I know of.

FALLIS Cemetery in Victoria County or is it Peterborough County Manvers Township, Ontario?